Easter traditions from around the world 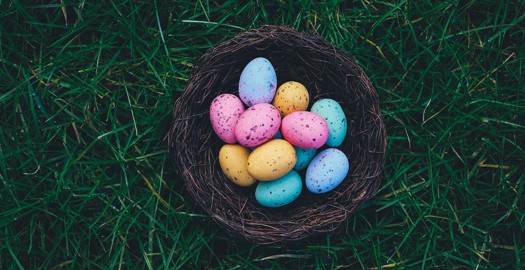 Whilst Easter has religious roots which translate around the world, modern traditions in the UK focus primarily on treating children to an abundance of chocolate products; and with characters such as the Easter bunny taking centre stage, the traditional meaning of the holiday can end up somewhat lost. Around Europe, there are plenty of different takes on the holiday, so we’ve picked out a few highlights from around the continent.

In Finland, bonfires are set alight throughout the country. Whilst you may assume this is to keep the cold at bay, its actual purpose is to pay homage to Nordic belief that fire drives away witches that fly around on broomsticks between Good Friday and Easter Sunday. Alongside this witchcraft themed tradition, children  have also been known to put soot over their faces, carry broomsticks and bunches of willow twigs, and go begging in the street – which all sounds familiarly like a British Halloween.

The tradition of ‘Smingus-Dyngus’ is  rather bizarre practice of pouring water over one another. People will throw buckets of water and use squirt guns to drench each other; which allegedly originates  from the baptism of the Polish prince Mieszko on Easter Monday in 966 AD.

In the small town of Haux in South Eastern France, the population will cook and serve a giant omelette in the town’s main square, using around 4,500 eggs meaning it has the capability to feed up to 1,000 people. The tradition is said to derive from a story about Napoleon, who  allegedly travelled through southern France with his army and stopped in the small town to eat. Napoleon enjoyed the omelettes so much he ordered the town to serve his army a giant one the following day.

On the morning of Holy Saturday, the unusually destructive tradition of ‘pot throwing’ takes place in Corfu. People will throw pots, pans and other crockery out of their windows, so you might want to make sure you watch out when walking around town this time of year! The origins of this tradition are somewhat hazy, with some saying the custom derives from the people of Venice, who on New Year’s Day used to throw out old items. A more timely and relatable belief however, is that the smashing of pots welcomes spring, symbolizing the new crops that will be gathered in the pots.

Over the Easter period in the Italian capital of Rome, Easter takes on a huge role. With the religious sovereignty that is the Vatican located inside the city walls, it’s hardly surprising to hear that the weekend celebrations have a huge impact. On Good Friday the Pope commemorates the Via Crucis, meaning ‘Way of the Cross’, at the Coliseum, where a huge cross is raised with burning torches illuminating the sky. The 14 Stations of the Cross are described in several languages by the Pope. Thousands of visitors from all around the world gather in St.Peter’s Square to await the pope’s blessing from the church’s balcony; this is described as ‘Urbi etorbi’ meaning ‘to the city and the world’.

If you ever find yourself in the Spanish town of Verges over the Easter period, you may be left thinking you’re experiencing Halloween as opposed to Easter. Over the weekend the townspeople of Verges begin their Easter traditions on Holy Thursday with the ‘dansa de la mort’ or ‘macabre death dance’. People will re-enact scenes from a play entitled The Passion, which includes dressing as skeletons and proceeding to parade and dance through the streets at night. The macabre dance begins at midnight and continues for 3 hours into the night.