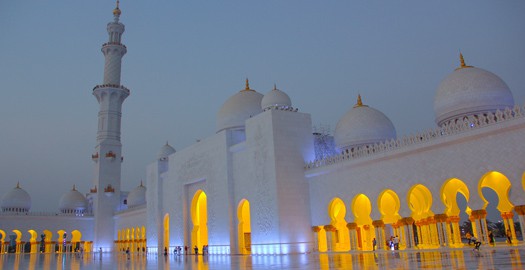 The top destinations for expats has remained fairly similar over the last few years but there has been a recent change in the tide with the United Arab Emirates (UAE) slowly climbing up the rankings. The UAE has built a reputation of taking in a diverse range of migrants from all over the world and there are currently 65,000 British expats living in the country, mostly concentrated in and around Dubai and Abu Dhabi. Its historic background and modern transition make for an interesting culture, but fortunately we’ve put together this guide to make relocating that little bit easier if you’re planning a move to the Middle East.

Despite its modern infrastructure, the UAE takes religious tradition very seriously and expats will have to ensure that they respect and adhere to this Muslim etiquette. This will inevitably cause some restrictions on day-to-day life as the breaking of these customs can result in penalties from fines to imprisonment. These conventions range from dressing modestly to the consumption of alcohol so it’s advised that you familiarise yourself with local laws before visiting or moving to the UAE.

The cost of property is high in the Emirates and buying or renting one isn’t made any easier by the amount of complicated and ambiguous legislation. One bedroom apartments can be bought for around £45,000 while houses typically start at around £110,000. In a lot of cases, expats will find that they can only ‘lend’ property from the ruler of their emirate, but a recent change in legislation means that those looking to invest in real estate will be granted a three year temporary residence permit providing the investment exceeds £160,000.

The countries official language is Arabic and this can be seen on all road signs, documents and in the local media. However, the UAE is well versed in the English language and almost everyone can speak it. Everything has an English translation accompanying it and almost all business meetings, telephone conversations and transactions will invariably be in English. Urdu is probably the most common language heard though as this is spoken by Pakistani and Indian Muslims and these make up the majority of the population.

Like a lot of countries, the Emirates is slowly losing its gastronomic identity thanks to the age of global diversity. However there are still an abundance of conventions when it comes to UAE food. As the climate doesn’t bode well for growing anything, vegetables are used sparingly and the majority of meals tend to be accompanied by rice. Meat and fish make up the main component of the Emirati diet as well as spices such as saffron, turmeric and cardamom. Some of the most popular dishes include Al Machboos and Al Harees but if you’re too accustomed to western culture, the likes of McDonalds, KFC and Pizza hut can be found in most major cities.

The climate in the UAE is generally hot and dry for the majority of the year, with the mercury often rising to 40C during July and August. Even in the depths of winter, the temperature doesn’t often fall below 12C making this probably the most comfortable time of the year. During the summer, a tropical wind known as the Sharqi makes living conditions particularly unpleasant. Certain regions of the UAE are also susceptible to violent dust storms.

If you’re planning a move to the United Arab Emirates, don’t hesitate to contact our International Removals specialists!