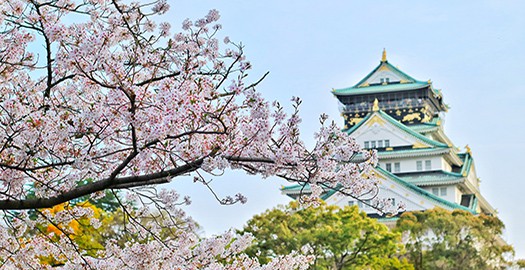 Spring is around the corner with blossoming flowers, cooler evenings and chirping birds.

From bursts of blossom, sunshine covering the sky and new flowers in season; embrace the new weather and put the cold icy winter behind.

So if you fancy selling up, putting your belongings in secure storage and going travelling this year, make sure you visit these beautiful places across the globe that are just picture perfect in springtime.

January sees the first bursts of pink and white in the southern subtropical islands of Okinawa and by the end of March and April the parks of Tokyo, Kyoto and Osaka are sprinkled with fragrant petals. Go for a picnic party under the arbours of a national obsession.

In the Moray Firth and River Tay dancing dolphins entertain visitors during spring. The most northerly colony of bottlenose dolphins are great to watch as the silvery shapes leap about above the water and hunt for salmon.

Dramatic winter temperatures give way to an intense, brief and eye-catching spring in Asian steppe grasslands. Between March and May snow melts setting fields ablaze with colourful irises, hyacinths, tulips, geraniums and crocuses.

Thick carpets of bluebells, which is a protected species, can be found on forest floors all over the UK. It is forbidden to pick or sell them or move their bulbs.

Not far from Amsterdam the town of Lisse is known as the Bollenstreek aka the bulb district. Every year thousands of visitors take to the town to walk through the tulip fields which spread over 70 acres and flower gardens.

A sundog is when cirrostratus clouds containing ice crystals reflect the light at a particular angle – it creates a giant halo. Finnish people call them sivuaurinko and they are very common and spectacular in spring when the sun is low.

From mid-March to May the air is thick with varieties of Snow Geese migrating.

They leave their prairies of the North American Great Plains to their breeding grounds in the Arctic tundra. And what is more the incredible noise of the honking din sounds like thousands of rusty generators.

Golden daffodils flower all over Europe but William Wordsworth made them especially popular in this part of Britain. Throughout April crowns of golden yellow heads can be seen fluttering and dancing in the breeze.

–Southern Europe to the Middle East

From late April and onwards snowbound valleys turn into vivid meadows with spellbinding splashes of delicate orchid and lily species brimming. Trekkers can spot Golden Eagles soaring above with flashes of colours of wild flowers of the Pyrénées.