The big million: Looking at the scale of our latest milestone 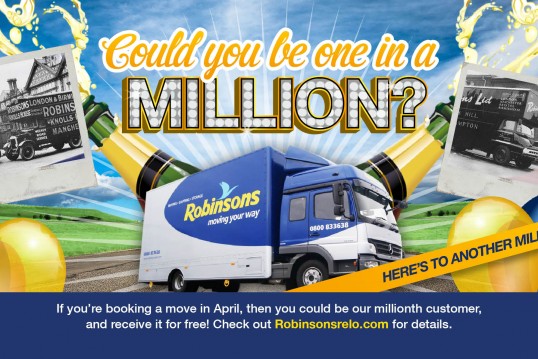 Since our founding in Manchester back in 1895, Robinsons has grown steadily over the years. Having seen two world wars pass, a moon landing and even seeing our country hoist the World Cup, the nation has experienced a lot over our 119 year existence. Now, after over a century of progression and growth to being one of the top five UK based leading specialists in International, European and UK moving, we’ve hit a big milestone!

This April, we’re all set to hit the big milestone of our millionth move. We think it’s kind of a big deal, so to mark the occasion, we’re letting you get involved in our celebrations, as we offer our lucky millionth customer their move for free.

To provide some context as to just how pleased we are to hit the million mark, we’ve looked into the grand scale of the number.

If these stats aren’t enough to blow you away and demonstrate the sheer scale of our million moves, then keep your eyes peeled! We’re really excited about our celebrations over the coming month, so we’ll be sure to divulge plenty more information on our big milestone throughout the course of April. If you want the chance to be involved in our celebrations, make sure you head over to our website.