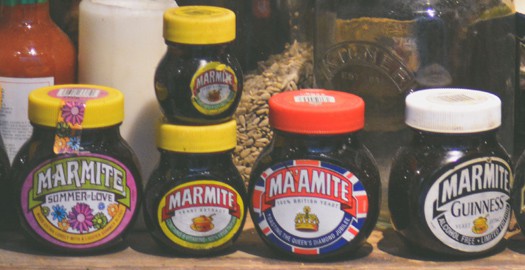 We’re all used to British luxuries, however with the news last week breaking that Canada has banned Marmite, Irn-Bru and Bovril, we can’t take for granted that when relocating, we’ll have home comforts available at our new location. Every country is different however, so if you’re planning a big move, check out our list to make sure you’ll have access to your favourite treats.

Another country that doesn’t allow the sale of Marmite is Denmark, which added the product to its banned foods list in 2011. The Danes’ food laws prohibit any foods fortified with vitamins, meaning that Horlicks, Ovaltine and Farley’s Rusks join the yeast extract spread in being absent from Danish store shelves. On the plus side, the countries strong stance on healthy foods without additives is a bonus for those looking to live a clean lifestyle.

If you’re relocating abroad with a full family, then a move to America may see you landing in a new destination where your kids’ favourite chocolate treat is unavailable. Due to the plastic treat, Kinder Eggs are banned across the US, with the inner treat being seen as a health and safety hazard. Although British chocolate isn’t banned, you’ll find that there is a noticeable taste difference when it comes to chocolate in the States, which contain a significantly lower percentage of cocoa than the same brands in the UK. If you’re unwilling to settle for the American manufactured products, there are import stores, such as World Market, which sell authentic British items.

Since 2011, French legislation has stated that, although it is available throughout the country in stores and supermarkets, Tomato Ketchup is banned in the nation’s schools. Although the recipe is simply a combination of tomatoes, vinegar, salt, spices and sugar, without anything remotely artificial in the recipe, the French have enforced the ban for ‘cultural’ reasons. Upon enforcing the ban, the man behind it, Christophe Hebert, chairman of the National Association of Directors of Collective Restaurants declared “we have to ensure that children become familiar with French recipes so that they can hand them down to the following generation”.

Probably not a location many of us are looking to relocate to or holiday within the borders of, however Somalia has one of the more quirky banned items from around the globe. The African nation has been embroiled in war over recent times, yet as of 2011 the Islamic group ruling the country has banned samosas for religious reasons, claiming they’re too western.